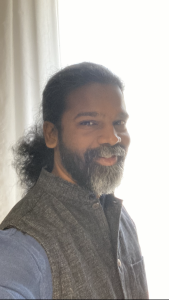 Dr. Waghmore has B.A in Political Science, History and Economics from Karnataka University (1999) and M.A in Community Development  from TISS (2001). He completed his PhD in Sociology as a Commonwealth Scholar from University of Edinburgh (2010).

Before joining IIT Waghmore was Professor and Chairperson at the Centre for Social Justice and Governance at TISS. He has held visiting professorship at School of Social Development and Policy, Fudan University (2019), Centre for South Asia - Stanford University (2013); School of Humanities - Hyderabad Central University (2011); Centre for Modern Indian Studies - Univeristy of Göttingen (2015).

My research has encompassed a mixed method approach to study social exclusion, politics at margins, policy processes and state-civil society relations. I have been using ethnography, with other qualitative research methods and descriptive statistics to underline how social exclusion operates in India. Ethnography has helped me keep my research outcomes nuanced. For instance while studying caste, I have focused on aspects of emotions – humour and anger to theorise caste better. This has helped me frame broader theoretical arguments on vernacular modernity in Indian subcontinent.

On the other hand I have also done policy relevant research that has helped corporations and state bodies. I have completed a research on Katkaris, one of the most vulnerable tribal groups in Maharashtra. While working with govt. and non-government development agencies over the years, I closely observed the influence of cultural politics on development processes and how state and non-state actors converge and disperse to institutionalize deprivation. This interface of culture, state and social exclusion processes has continued to be a major area of my research interest.

My research also explores social movements of  traditionally marginalised groups and their attempts of achieving genuine civility and democracy in the Indian context. Current research interest includes a focus on changing forms of caste etiquette in modern India.

I have taught undergraduates and postgraduates of social sciences and engineering background at Edinburgh University, Göttingen University, Tata Institute of Social Sciences and Indian Institute of Technology-Bombay. My teaching has varied from courses in research methods, social theory, political economy of social welfare, civil society, development theories, caste in south asia, and politics and citizenship in India.

Withering Caste in Urban Locales. Based on a research project funded by ICSSR, explores and compares the cities of Mumbai and Ahmedabad.

The Kshatriya Victim: Marathas and Social Power in Maharashtra, Symposium of India Seminar on Victimhood, December 2019 (In Press).

Go write on the walls that you are the ruler of this nation’: Dalit Mobilisation and the BJP, (with Hugo Goringe) Indian Politics and Policy Journal. Vol. 2, No-1, April 2019

Social science research and inclusive polices: a focus on Adivasis, Dalits and Muslims (With Hugo Gorringe)." The South Asianist 3.1 (2014).

Beyond Depoliticization? Caste, NGOs and Land Rights in Maharashtra, India in Development and Change. 2012. Vol.43 (6).

Assembly polls: One thing is for certain – Maharashtra will continue to be Maratha-rashtra. Scroll.in, October 19, 2019

Sociology for the Aryavrat, The Wire, November 3rd 2019

The Making of Hindu Cosmopolitanism in Urban India. By Invitation in LSE Blogs

Not Hindu Nationalism, the trump card of BJP is nationalist Hinduism, Scroll.in,  March 18, 2018

Vegetarianism in India has more to do with caste hierarchy than love for animals, Hindustan Times, April 7, 2017

Hindu Nationalism and the Problem of Trust. Outlook, March 3, 2016.

India Tomorrow: What Young Indians Want. The Conversation, UK, May 14, 2019

Subalterns have a role in making of civil society, Round Table. February 2010

Why are the Gujjars Protesting? Voice of America, May 2007

Politics of Hope in Europe and India. (With Indrajit Roy, York University and  Carole Gayet, CNRS-Paris,  funded by EQUiP – Europe India Platform for the Social Sciences and Humanities, 2019-2021)

Caste and Colonialism, Funded by IRCC-IITB. Explores at the political use of violence by Marathas against Brahmans in Postcolonial Bombay.

Withering Caste in Urban Locales: A study of Ahmadabad and Mumbai. Funded by ICSSR (2015-2019).

Socio-Economic Status of Katkari Tribe, for Government of Maharashtra: (Completed May 2015). Using mixed methods, this research study focused on the socio-economic study of Katkaris (listed as a Primitive Tribal Group). The study used ethnography, qualitative interviews, and household surveys [to calculate multidimensional poverty]. The Maharashtra Governors Office [through Development Board] funded this research study. This report  is available on the website of the Governor of Maharashtra.

Marginal Populations, Social Mobilisation and Development – A research collaboration between Tata Institute of Social Sciences and University of Edinburgh, funded by British Council, I was the project in-charge for India Side. [Total Project Grant £ 250000] 2012-2018.